I added the Cave In set this morning and going to append to this particular part of my blog to say that the show was a success!!! Cave In played first followed by Coalesce, which I also recorded. Haven't worked on that show yet, their set suffered some mixing problems early during the beginning of their set unfortunately. I'll eventually release it, but don't expect it to sound as good as my other boots. People at the show will be witness to that as well as what you'll hear in the recording. The guitars were extremely low in the mix at the beginning of Coalesce's set and the fans pretty much had to yell to Daniel the sound guy (and Mr. Church of the 8th Day). The vocals also were low at the start of the set as well. This will have been my first hearing of Coalesce although I did purchase the covers album and a split w/Boy Sets Fire @ the Vacation Vinyl store. Just haven't spun them yet, but the Coalesce set was as hardcore as anyone can get. All members of the band were animated, particularly the guitarist as he threw his arms wildly about and switches rapidly into guitar playing mode for a brief second. The singer of Coalesce was yelling his larnyx out of his throat. All members were involved in their own groove but it was cohesive as a whole.

For Cave In, I wish I had seen them more in the past, but I never did. Last night's show was my first Cave In show and hopefully more will come in the future. Cave In were amazing last night, full of energy and were gracious to thank the people of Scion for hosting the show @ the Knitting Factory. Sadly enough, this will be the last Scion show @ the Knitting Factory. The line was long of course and I believe everyone got in. My only complaint was how they handled the guestlist for the people who signed up @ Vacation Vinyl on the exclusive list was terrible. Well, the show made up for that and that will be the last FREE Knitting Factory show through Scion. More on Cave In, they played an awesome mix of old, new and in between! It was a balancing act that they had to do to please the audience.

A picture of the setlist! Thanks Kingsleep! 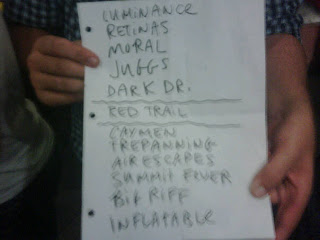 Tonight I will have respite till tomorrow for I will see Far @ the Knitting Factory opening for Thursday. That's in the main stage, but the front stage has These Arms Are Snakes and if times don't conflict I'll try to catch TAAS as well after Far!!! Then Sunday I have Sunny Day Real Estate, which I am ecstatic about!!!

The Valley Arena opening for Denali @ the Echoplex is now available here: